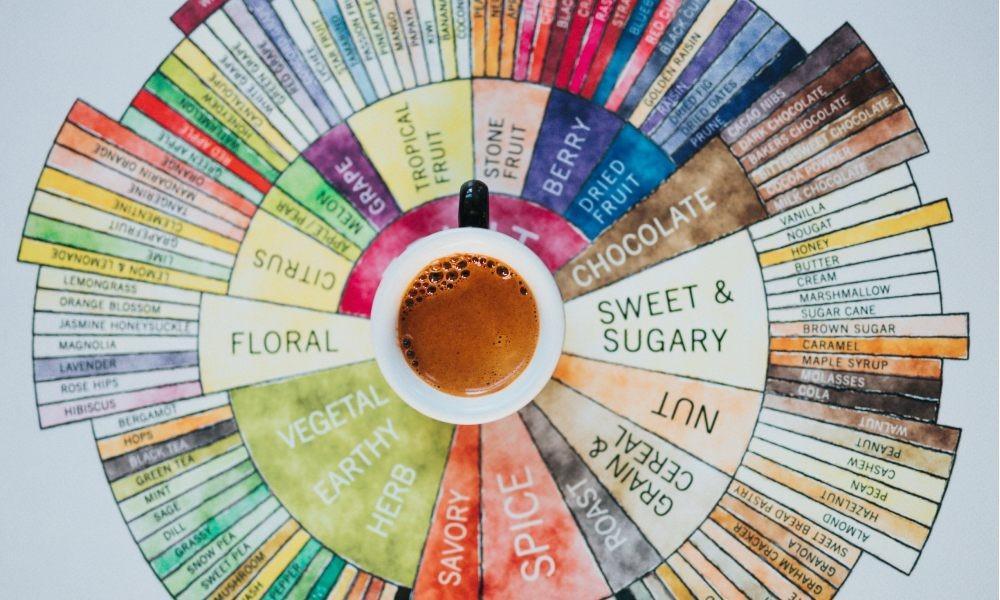 Is it time to reinvent the Coffee Taster’s Flavour Wheel?

João Carvalho speaks with the CoffeeMind’s CEO, Morten Münchow, about how the SCA flavour wheel can become more inclusive.

In 1995, the Specialty Coffee Association (SCA) made a bold move. In an attempt to standardise coffee tasting, it launched what has now become the iconic Coffee Taster’s Flavour Wheel.

Consisting of more than 100 descriptors laid out in a 360-degree diagram, the flavour wheel’s main purpose was to create a common language around coffee’s aroma, flavour, and texture for professionals.

In particular, it was intended to aid the shift from subjective to objective discussions about flavour, with the goal of helping the entire supply chain make more informed decisions in everything from evaluating to competing.

Thanks to its eye-catching design and attractive colour scheme, it also captured the hearts and minds of consumers. Today, flavour wheels adorn the walls in coffee shops, roasteries, and homes the world over.

However, despite being revised and updated with the help of World Coffee Research in 2016, the flavour wheel has faced criticism over the years.

The renewed version sought to be more assertive by codifying a wide range of describing words linked to the tastes and aromas found in coffee. Yet some claim it still has significant room for improvement.

The basis of the updated version of the flavour wheel was a “dictionary” of coffee flavour descriptors, called The Sensory Lexicon.

The Sensory Lexicon was compiled by sensory analysts from the US and Europe who tasted hundreds of coffees over the course of a year. During this time, they documented the flavours, aromas, and textures which they repeatedly perceived. In total, they identified 110 descriptors, including pomegranate, whisky, and maple syrup.

While both the lexicon and the flavour wheel have become invaluable tools for many in the industry, one of the main problems concerns exclusivity.

Specifically, a number of the descriptors are tied to ingredients that are not readily available in all countries. This is particularly true of producing countries, which often rely on local produce.

As a result, it can make it difficult for farmers to accurately evaluate their coffees in line with buyers and roasters, removing some of their negotiating power. It can also put up barriers to obtaining a deeper understanding of their coffees’ characteristics.

Morten Münchow is the CEO of CoffeeMind, a coffee consultancy and training centre in Denmark. Over the last few years, Morten and his team have been working to develop their own flavour wheel with the help of various collaborators, including sensory scientists. Based on his experience, he explains that inclusivity is also one of the biggest hurdles he’s identified.

“The first challenge is mapping the descriptors,” he says. “It has to be enough so people can feel they represent all the coffees that they would ever experience, but also not including so many that it makes things chaotic.

“The second problem is which references we should use to map those flavours,” he says. “With the SCA wheel, we can tell that they tried to create a pattern. But it is almost impossible to establish one because of the many different cultural aspects that relate to tasting around the world.

“This isn’t to say that their work isn’t amazing – but it might be considered a little reductive.”

In a 2021 video titled “Decolonising Coffee Through Flavour”, SCA-certified coffee consultant Ārāmse discusses the importance of adding new flavours based on different locations.

To give an example, he says that amla and jamun, two fruits native to India, can be related to coffee on various fronts and used to replace certain items on the flavour wheel which are often difficult to find.

This approach is echoed by Morten, who explains that creating region-specific wheels is in the pipeline for CoffeeMind’s project.

“We think our next step would be making a region-specific wheel to be used in different areas of the world,” he says. “However, it’s also important to us to work from a scientific perspective.”

By doing so, Morten believes that the specialty coffee industry can continue to move away from the air of elitism for which it has often been criticised towards a more equitable and approachable system.

“We want to get rid of all storytelling to then make sure to empower people on the basics before moving to more advanced subjects,” he says.

Putting together large amounts of data in the form of a visual tool that guides professionals is no easy task. However, with a bit of tweaking, the SCA’s flavour wheel can become a more inclusive and comprehensive resource for the whole coffee industry.

Is it time to reinvent the Coffee Taster’s Flavour Wheel?