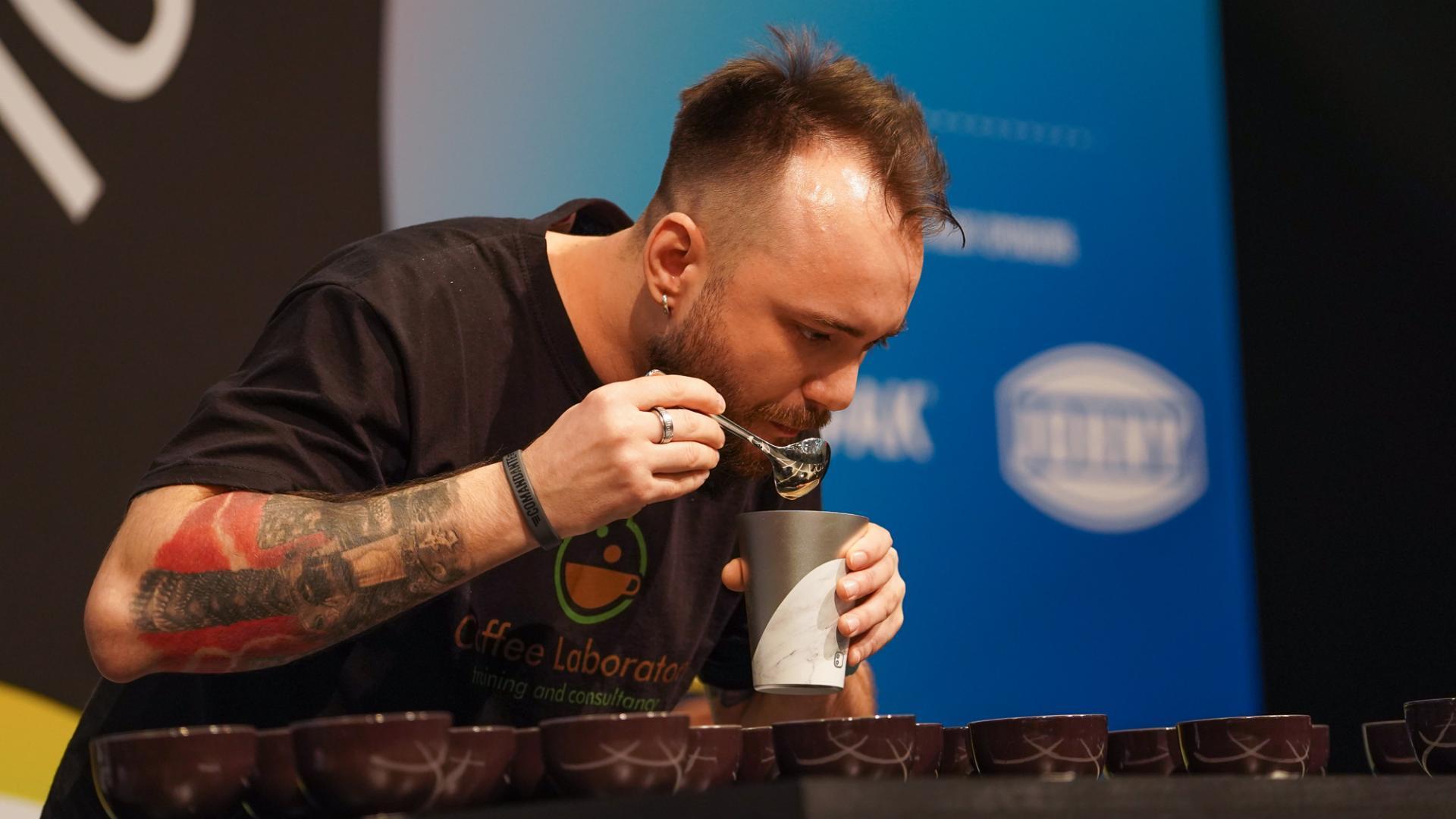 Finding the perfect coffee grind size: Can you rely on taste alone?

2019 World Cup Tasters Champion, Daniel Horbat, breaks down the specifics of coffee grind size and its relationship with taste.

When you sip coffee, whether it’s espresso or filter, something remarkable happens in your mouth. A collaboration between taste buds, enzymes, your brain, and the array of dissolved solids in the drink itself creates – in most cases – a delicious and pleasant experience.

“Taste is the most important tool for anyone working in the coffee sector,” says Daniel Horbat, who opened a roastery in Dublin shortly after winning the World Cup Tasters Championship in 2019.

Taste is the term we use to describe the particular flavours we identify in a food or drink. It’s so useful, in fact, that roasters like Daniel use it to refine and perfect the coffee we all drink. Naturally, it’s also the thing that keeps us coming back for more.

This sentiment is echoed by YouTuber and coffee expert James Hoffman. In his influential series of videos on espresso extraction, he emphasises the value of a good palate.

“[It allows you] to taste, tune, and react to changes in variables and eventually find out the point at which tastiness is achieved,” he says.

However, there are arguably dozens of variables that impact the final flavour of coffee. These can take effect during production, processing, or roasting, or even when you’re brewing it. As such, baristas are primarily interested in those variables that concern extraction.

Of these, perhaps the most complex, misunderstood, and frustrating is grind size. Many coffee consumers buy their coffee pre-ground, which is understandably far easier and cheaper to brew.

In a professional setting, however, or even at home, grind size is a variable that can be tweaked and tuned to bring the best out of different coffees and brewing methods.

Adjusting grind size does affect extraction, but until the coffee has been tasted, the brewer can’t interpret these changes as being positive or negative.

By definition, taste is the sense that enables us to distinguish between perceptions of sweet, sour, bitter, salty, and umami. Flavour can be roughly defined as the blend of combinations of these perceptions, and it may also encompass aroma – another key component of the coffee experience.

Accordingly, Daniel believes that to taste coffee and to experience its flavour are subtly different experiences.

“Flavour is subjective but taste is more concrete,” he specifies.

To better understand how these concrete aspects of coffee flavour relate to extraction, roasters have access to useful technology and tools. For example, they are now able to use coffee particle analysers to measure surface area, which is a very precise indication of grind size.

It’s also used in tandem with a refractometer, which measures the total dissolved solids (TDS) in a cup of coffee. This way, a comprehensive data set can be compiled. However, Daniel points out that this type of analysis is not enough.

“At the roastery, we have the most advanced tools,” he says. “We measure everything, but at the end of the day you need to taste the coffee.”

In his opinion, even the most accurate data set is meaningless if the coffee does not – objectively – taste good. As such, he’s dedicated a huge amount of time to training his palate.

Now, he’s able to accurately distinguish between tastes, enabling him to identify “good” and “bad” traits in coffee. This sort of sensory analysis is the backbone of specialty coffee, and is enshrined in the Specialty Coffee Association’s Coffee Taster’s Wheel.

“After I won my first Cup Tasters title I said: ‘Okay, I’m good, but I didn’t understand why I’m good’,” Daniel says. “So I did the SCA Sensory Skills course and the Pre-Q, which covers the practical side of grading coffee. I learned a lot from that.”

The fine, the coarse, and the ugly

The fundamentals of coffee making involve extracting flavour from ground coffee. As a rule of thumb, the finer the grind, the more the total exposed surface area of the grounds. In the case of espresso, this results in more effective extraction, as more of the coffee mass comes into contact with water.

A coarser grind creates far less surface area, meaning it takes far longer for the water to extract soluble compounds from the coffee. This can prove disastrous when making espresso, as less resistance means faster water flow. Because the water and coffee spend less time in contact, very little soluble material will be extracted.

The result will be a sour, slightly salty espresso, because acids and salts are more soluble than sugars. Subsequently, the cup will also lack sweetness and a good finish. These are good indicators that you need to grind finer.

Conversely, there are several brewing methods that depend on coarser grounds because of longer steeping times. These include french press and pour over, both of which produce coffee that’s very different from espresso. By using coarser grounds, many believe that they have more control over the brewing process.

Adjustments coarser and finer can be done with almost every coffee grinder, whether it’s a hand grinder or electric. However, because espresso brewing involves working with very finely ground coffee, a grinder with stepless adjustments, such as the Bellezza Piccola, is typically recommended.

This gives the brewer virtually infinite control over grind size, and that’s the kind of variable control that results in a perfect, balanced espresso.

Unfortunately, despite the somewhat dependable rule of thumb, the issue of grind size is far from straightforward. Research shows that grinding ever finer will inevitably create more and more resistance in the puck.

Eventually, water may not be able to pass through it without breaking it, creating a phenomenon known as channelling. Essentially, this causes over extraction in the grounds around these channels while leaving the rest of the puck under extracted.

For many baristas and prosumers, these types of issues are teething pains on the way to improving their espresso skills. Ultimately, once you nail down grind size adjustments – using the right grinder – you’re on your way to brewing excellent coffee.

Finding the perfect coffee grind size: Can you rely on taste alone?